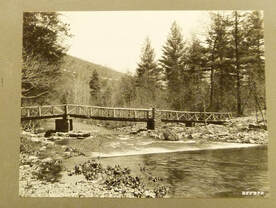 The Hoover footbridge at Camp May Flather was dedicated by Mrs. Hoover in 1930. Photo courtesy of North River Ranger District
More than 90 years ago in the newly formed national forest in northwest Augusta County, the First Lady of the United States dedicated a camp that is still in use today. Camp May Flather is a 50-acre camp near Stokesville that was established for the National Capital Girl Scout Council in 1930. Today it is still going strong with camping space for almost 300 campers at a time.

The history of the camp lies in its name – May Flather. The camp was the brainchild of a wealthy Washington, D.C., socialite named May Flather who was great supporter of the Girl Scouts. Born Mary Rebecca “May” Mullan in California in 1871, she married Henry Flather, an executive at the Riggs Bank in Washington. D.C. They owned an historic estate in Anne Arundel County, Maryland. That estate, Tulip Hill, was known for its fortress like construction and amazing gardens. George Washington had once visited the estate back in the 1700s.

May Flather. Photo from Alan Cramer Collection
Mrs. Flather’s cause in life was the Girl Scouts. She undertook the job of restoring the historic house and gardens where she lived and opened it to the public in order to raise money for an area Girl Scout scholarship. More than that, however, Mrs. Flather was actually instrumental in getting the Capital region scouts organized. She felt like the girls involved in scouting needed a mountain camp and so her focus came to rest in the brand-new national forest in the western mountains that lined the Shenandoah Valley. She helped fund and raise money for a camp in those mountains of the Shenandoah Valley that girls could visit. That camp, May Flather, was named in her honor. 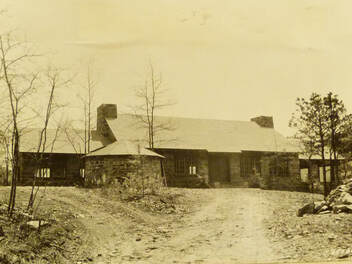 Stone lodge at Camp May Flather. Photo courtesy of North River Ranger District
Running through the beautiful mountain camp was the North River, one of three tributaries that form the South Fork of the Shenandoah River. Before Camp May Flather was fully functional it needed a footbridge across the North River. Mrs. Flather turned to another Girl Scout supporter for help with the footbridge. Lou Henry Hoover, also known as the First Lady of the United States because of her husband U.S. President Herbert Hoover, had been a Girl Scout as a child so the camp was something that immediately appealed to the First Lady.

Mrs. Hoover gave the $10,000 necessary to build the bridge and then on August 7, 1930, she traveled to the mountains of western Virginia to help open the bridge and dedicate the camp. On that day, amid great celebration, Mrs. Hoover snipped a ribbon made of ivy and walked across the footbridge into camp. That night she spent the night in Camp May Flather in a tent amid several hundred other girls. The next day she traveled back to Camp Rapidan where her husband had a presidential retreat on the other side of the Shenandoah Valley.

DC Girl Scouts swimming in North River at Camp May Flather in 1930. Photo from Alan Cramer Collection
And with that ceremony the camp opened and has been going strong ever since. In 1963 the National Capital Girl Scout Council became the Girl Scout Council of the Nation’s Capital, but Camp May Flather was still an integral part of the scout’s summer experience. The Shenandoah National Forest soon became the George Washington National Forest. Today, a few black and white photographs in the historic files at the North River Ranger District office remind us of the history that still remains amongst the trees of the national forest. Mrs. Flather died at the age of 91 and is buried in Baltimore.