The first Sexton Shelter, built in 1930 near the Pinnacles in what later became Shenandoah National Park. Photo from PATC Archives.
Among Potomac Appalachian Trail Club (PATC)’s numerous rustic cabins perhaps none has a more interesting and checkered history than that of Sexton Shelter. What started as a stone shelter in the Pinnacles area of the Blue Ridge in 1930 is now just a chimney and a concrete slab along Jerry’s Run Trail in Ramsey’s Draft Wilderness Area on the opposite side of the Shenandoah Valley.  This is the story of that peculiar migration and the “lives” of a mountain cabin that served generations of campers but is now largely bygone history.

In 1930, six years before Shenandoah National Park (SNP) was established, Roy Lyman Sexton, a Washington, DC physician, PATC member and supporter of the National Park system, along with a man named Thomas Hickman, donated funds to build the stone cabin that came to bear Sexton’s name south of Rt. 211.  A PATC trail guide from 1938 described it as the first shelter on the Appalachian Trail (AT) south of the Susquehanna River.  By the time of that publication, however, the shelter was no longer at that location as, for reasons lost to history, the state of Virginia had condemned the Sexton Shelter when the SNP was established in 1936.

Sexton Shelter, built on Jerrys Run in 1937 and used by PATC members for 30 years until it burned due to lightning. Ruth Blackburn, Pete Peterson, and Fred Blackburn.are shown. Photo by Dede Bauer from PATC Archives
Sexton Shelter was reborn in 1937, though, when Virginia allocated funds raised from the dismantlement of the original structure to PATC to build a new closed log cabin by Jerry’s Run, less than a mile below the crest of Shenandoah Mountain.  According to the 1938 guide, it was the largest shelter built by the Club, accommodating 12 campers.  “It is fully equipped with mattresses (4 double and 4 single bunks), 12 blankets, cooking utensils, first aid kit, snake bite outfit, ax, saw, lantern and dishes.”

A local man named George Armstrong from Highland County was among those who built the shelter from logs cut nearby.  The October 1937 edition of the PATC Bulletin, precursor to the PA, recounted how Armstrong shared local lore with members of a PATC excursion to the area on Memorial Day of that year – stories about the century-old clearings in the “primeval” timber stands, protecting area settlers’ sheep from bears, and characters among the settlers, like the Jerry Hodges who gave his name to the nearby creek.

The second Sexton Shelter on Jerrys Run, built from logs and other building materials hauled in by Ray Kisamore's draught horses in 1968. Photo from PATC Archives.
Alas, these good times were disrupted when fire, probably caused by a lightning strike, burned Sexton Shelter in 1966.  PATC resolved to rebuild the cabin on the same platform, but this time materials for the structure had to be hauled in, which the National Forest said could be done by either helicopter or horse-drawn sleds since there was no road access.  PATC determined overland would be cheaper and in 1968 contracted with a local man named Ray Kisamore who along with his father-in-law Roy Botkin, other family members and neighbors hauled in logs, cement, etc. with his Percheron draught horses over a six-week period.  They started from Rt. 250 at what is now the Confederate Breastworks and led the horses along the Shenandoah Mt. Trail and then down Jerry’s Run to the clearing, a distance of 2.7 miles each way.  Reconstruction of the cabin was overseen by Robert Humphrey, who helped build many of PATC’s cabins.  Sophisticates even then, PATC members reportedly celebrated completion of the new cabin with champagne.
​ 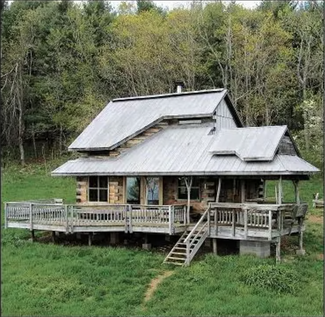 Mutton Top Cabin on the Blue Ridge in Greene County. PATC used logs from Sexton Shelter on Jerrys Run in this cabin. Photo from PATC Archives.
Upshot:  Sexton Shelter had to be dismantled again, and PATC in 1986 again hired Kisamore and his Percherons to haul out the Sexton logs the same way they had been brought in 18 years before.  This time Bill Shuey of Swoope and Buck Humphries of Deerfield and their families reportedly helped haul the logs.  Legend has it that draught horse Nell participated in both moves.  At PATC’s request, Kisamore stored the Sexton logs in his barn near Churchville until 1991, when PATC used them in construction of Mutton Top Cabin on the Vining Tract in Greene County east of SNP – these sturdy timbers thus landing in the Blue Ridge not far from where Sexton Shelter began decades earlier.