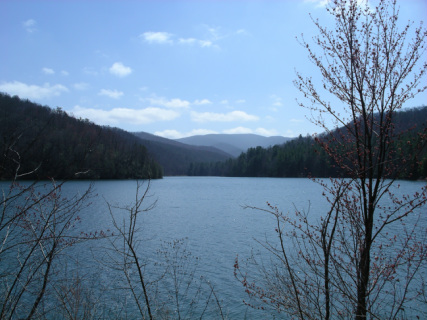 Switzer Lake, Harrisonburg's principal water supply
Shenandoah Mountain’s eastern flank forms a major drainage divide for the headwaters of two major rivers, the Potomac to the north and the James to the south, both of which flow into the Chesapeake Bay. Water from Shenandaoh Mountain helps to supply the needs of people in Washington, DC, Richmond and Hampton Roads metropolitan areas. Almost 4 million residents downstream obtain drinking water from the James and Potomac Rivers (Wild Virginia, 2008).

The cities of Harrisonburg (Switzer Reservoir) and Staunton (Staunton Reservoir) both benefit significantly from drinking water supplies filtered by forests that would be protected under the Shenandoah Mountain Proposal. In all, approximately 262,598 people obtain all or some of their drinking water supply from George Washington National Forest surface waters (Wild Virginia, 2008).

Read about the fascinating story of how Staunton found clean municipal water from the North River in the 1920s. (article by Nancy Sorrels)