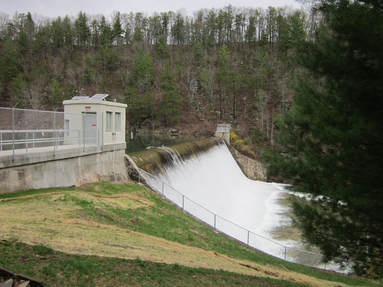 Staunton Dam was the only reservoir on Shenandoah Mountain in 1949. Photo by Lynn Cameron
The initial response by local, state and federal agencies, churches, organizations and neighbors was strong as they worked together to offer assistance, restore order, and take steps to prevent future flooding.  The National Guard came to keep order in Bridgewater, help with rescue work, and help people dig out of the mud and debris. The police and neighboring fire departments helped, as did churches, Ruritan Clubs, the North River Future Farmers of America (FFA), and many others.  In addition to all the cleaning up, repairing and rebuilding, it was necessary to inoculate against typhoid fever, a real risk when water is contaminated.  Mennonites from Parkview community in Harrisonburg set to work building 10 houses in Stokesville, furnishing both materials and labor for these homes. ​

Soon after the floodwaters subsided, engineers went to work plugging channel breakouts and removing gravel bars, rocks, snags and brush impeding the flow of water. Within a year the Town of Bridgewater and the U.S. Army Engineers had proposed a flood control levee along the Dry River in Bridgewater to be paid for by the Army Engineers emergency fund. ("Bridgewater Plan" April 1950)  The U.S. Department of Agriculture focused on work along the North River at Stokesville, Towers, Spring Creek, Briery Branch, and Beaver Creek. ("50,000 for Flood" 3 August 1949) 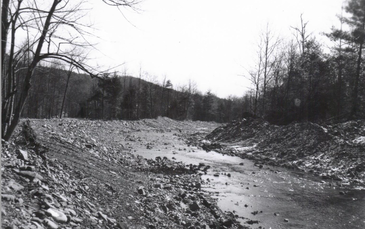 Channel restoration near Camp Todd, 1949. Photo from GW&JNF Archives.
North River Restoration
The upper North River had historically been considered among the best native brook trout fisheries in Virginia. (Hack & Goodlett 1960)  Soon after the flood of 1949, the Forest Service cleaned out debris in the upper North River to improve flow and restore the channel. According to Fisheries Biologist Dawn Kirk, “Continued channel erosion, deposition, and cleanout operations resulted in an unstable channel and bridge maintenance problems” (Kirk 2013)

Beginning in 1959, the Forest Service undertook an extensive 6-year restoration project on the upper North River that involved installing gabion baskets to stabilize the stream channel and restore native brook trout habitat.  Gabions, wire baskets filled with rock, were installed upstream from what is now Elkhorn Lake to beyond Camp Todd. 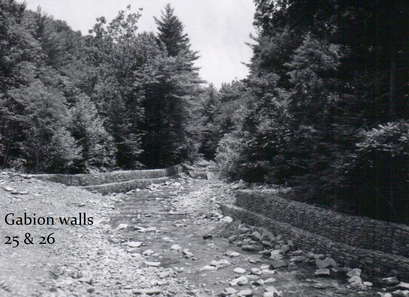 Gabion walls installed along upper North River. Photo from GW&JNF Archives.
Three types of gabions were installed to prevent the banks from eroding and depositing silt and debris into the riverbed:​The cross-channel weirs were installed "to reduce velocities and create fishing holes.” (Kirk 2013)

This extensive gabion work had mixed results.  The cross-channel weirs were all washed out before the flood of 1985, which then washed out most of the walls and groins.  The Forest Service monitored the gabions over time and decided not to repair or replace them since they were not effective, for the most part.  The agency concluded that it’s better to “work with the energy of the river, not against it.” (Kirk 2013)  Remnants of some the gabions can still be seen from Forest Road 95 today.

In 2005, the Forest Service relocated sections of Forest Road 95 to higher ground to reduce the number of stream crossings and bridges and minimize future flood damage to the road.
References
​"$50,000 for Flood Control Work Above Bridgewater."  Daily News Record, 3 August 1949.

Hack, J. T. and Goodlett, J. C.  Geomorphology and forest ecology of a mountain region in the central Appalachians.
USGS Professional Paper 347, 1960.  This is about the Flood of 1949 in the Little River area.

More Information
For more about the flood control reservoirs, see: