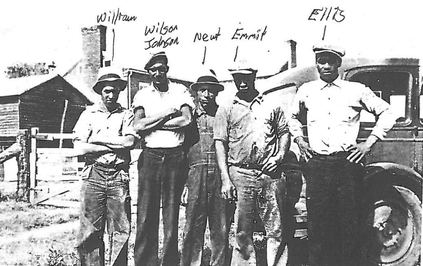 On June 17 of that year a cloudburst dropped 15 inches of rain on the area along the county line around Reddish Knob in the George Washington National Forest. The tiny headwater streams filled and overflowed and the mountainsides slid away. Those little streams flowed into the North River, a tributary of the South Fork of the Shenandoah River. The North River turned into a raging monster that
night, ripping through houses and farms and destroying everything in its path.

The individual stories from the flood are hard to comprehend even 69 years later. One story that has almost been forgotten of that harrowing night was recently told to me by Barbara Randolph Wagner who was six years old during the Flood of 1949. Her parents, John and Lucille
Randolph, lived on their grandfather William Randolph’s farm near Natural Chimneys along the North River. At the edge of the farm right down by the river was a small African-American settlement. There were eight or ten houses and about 25 or 30 people living in the settlement. Most of the families had the surname of Strother or had married into the Strother family. In fact, the white families of the area sometimes referred to the small village as “Strothertown.”

​Even though Barbara was only six years old she has vivid memories of the flood events. She remembers the rain falling harder and harder throughout the day and the river coming closer and closer to the cluster of houses on the edge of their farm.  “Finally my father told the families who lived in those houses that it was too dangerous for them to stay in their houses. My parents told them they had to come up and gather in our house,” she recalled of that night.
​
And that is what happened. Somewhere around 30 African-Americans crowded into the Randolph house. The women sat in the kitchen and prayed aloud and the men stood on the porch and worried about what was happening to their homes.

“I remember hearing the women praying out loud and I can remember all night hearing the loud noises of their houses being swept off their foundations and crushed in the trees by the water,” she recalled. She remembers one elderly black woman who sat in the corner of the kitchen and, as she heard the roar of the river and the crashing of the houses, she would shout out “Oh Lord, bless us all.”

Even as their world was being destroyed, the black families clustered in the Randolph home urged Barbara’s father to get his wife and children (Barbara and her six-month-old baby brother) to higher ground because the North River was creeping toward the farmhouse. “They said they would keep watch over our house while we left for higher ground.” So, Barbara’s mother took the children to another relative’s house outside of the ravaging floodwaters.

“Nothing was ever the same after that night,” Barbara remembered. Her recounting of the flood has been preserved by her granddaughter Holly Wagner in an essay done for a class assignment. The water never made it into the Randolph house although it got close, but others were not so lucky. She remembers relatives and neighbors whose houses were dislodged off their foundations and destroyed and of cars being stuck in trees. Bridges were gone and the community was cut off from the world. As for that small African-American community on the edge of her grandfather’s farm, it was gone forever. Every single trace of their homes had disappeared. “They lost everything they had,” Barbara
said of her neighbors and friends. The community was never rebuilt. Some moved to Bridgewater and others to Parnassus. They moved on with their lives and found solace in their church, North River Baptist Church.

“They were our friends and our neighbors and they lost everything. It was so horrible. I will never forget the sounds of their houses being crushed to pieces in the flood,” she said sadly.

The only thing that remains today of that small settlement are memories such as recounted by Barbara Wagner and the daffodils and roses that still push up in the spring to mark the yards of the people who once made their homes down along the North River.