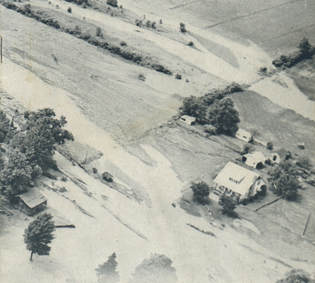 As they flew over the flood area to drop food, Harry Jopson and the Piper Cub pilot would likely have seen scenes like this one in Stokesville. Photo from cover of Flood of June 1949 in Stokesville-Bridgewater Area. Virginia Department of Conservation and Recreation. 1949.
“We had had a dry spring that year”, Dr. Harry Jopson, biology professor and track coach at Bridgewater College recalled.  “When it clouded up and began to rain on Wednesday afternoon, I thought, ‘This is just what the farmers need’.”

​The rain continued through Friday, one thunderstorm after another.  On Friday afternoon, Harry decided to leave his lab at the college and go check on his hunting group's cabin on Tilman Rd. near Briery Branch.  As he drove out to the cabin, he could see the rivers were flooded, and people were out of their houses watching.  After supper, the lights went out.  Harry and his hunting  friends decided to go back to Bridgewater, but by then he couldn’t get near the bridge over Briery Branch.  There was really no passage from the cabin except to walk across Narrowback Mountain, which they did.  They hiked to a farm on the eastern side of Narrowback and were airlifted out, one at a time, in a Piper Cub, whose pilot was delivering food and water to marooned flood victims.  Harry assisted in dropping food out of the airplane.  He recalled that the pilot landed in someone’s yard, right in front of their house, to make a drop-off.

From the air Harry had a bird’s eye view of the flooded Valley below.  At Natural Chimneys, the North River was 200 yards wide.  Many homesteads were flooded and needed food.   The approaches to bridges were all washed out and people were stranded.  Their rich topsoil of fertile farms was washed away, leaving fields that would never be as productive again, some covered by cobbles. 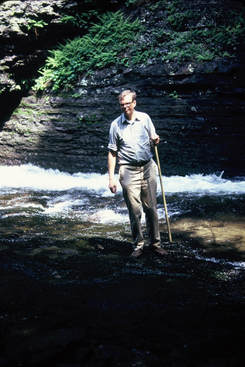 Harry "Doc" Jopson. Photo from Jim Murray Collection
When Harry finally made it back to Bridgewater on Saturday, he learned that floodwaters had risen to 22" on the first floor of his house on Broad St.  His daughters, Leslie and Harriet, and Artrella Rawley, the Jopsons' cook, were at home when the deluge hit.  They moved possessions to second floor and stayed there for the duration.  A neighbor’s house had been swept off its foundation and carried through the Jopsons' yard with a mother and two daughters clinging to the house.  Leslie, only 12 years old at the time, could hear them screaming from atop the house.   Mrs Margaret Bricker and her 9-year-old daughter Frances were among the three who died in Bridgewater. Miraculously, 12-year-old Betty Bricker, who was washed away with her mother and sister, was able to grab onto a sycamore tree and hold on for four hours in the raging flood waters until she was rescued by Alvin Cline and Maynard Southard, two heroic young men from Bridgewater who reached her by boat just as her strength gave way.   ("Betty Bricker"  19 June 1949)

Leslie Bulken recalls that many Bridgewater residents were not affected by the flood and were able to help those who were.  There was much work to be done to restore homes and clean up debris.

In the years after the Flood of 1949 Harry Jopson played a leadership role in advocating for flood protection by helping to form and chairing the North River Land and Water Conservation Association. The Association collaborated with state and federal agencies to fund and build dikes and reservoirs on the tributaries of North River.  Prior to the flood, Staunton Dam was the only reservoir on Shenandoah Mountain tributaries.  Now there are 10 reservoirs. 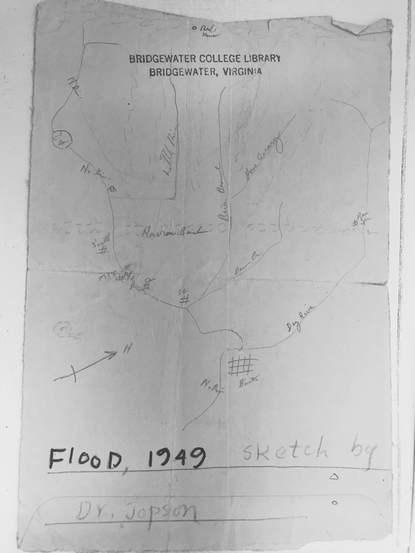