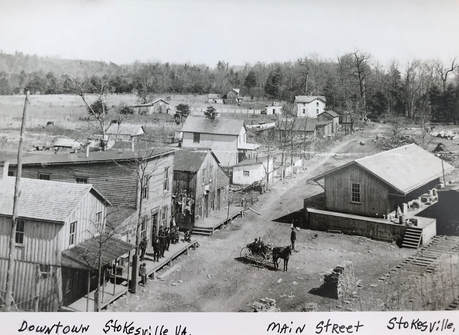 The houses on Main Street of Stokesville (east side of North River), shown here some years before the flood, were washed away or totally ruined. Today only the Maggie Michael house (top center) still remains. Photo from Gay Michael and Dorwon Emmett Collection.
“Stokesville is Gone”
“Stokesville is gone” is how the the Richmond Times-Dispatch (24 July 1949) summed up the effects of the flood that was "born in torrential rains in the Reddish Knob region of the mountains."  The mountain streams drained into the Little and North Rivers, causing a wall of water in the night.   Stokesville was the “first community hit by waters swirling down from the mountains.  There is nothing left to repair…The flood had completely washed away the 21 dwellings that made up the little community, leaving only the church.”   Even a year after the flood, this once booming tan bark and lumber center that was the western terminus of the C & W Railroad had not, for the most part, been rebuilt.  The community was gone. ("Year Ago" 17 June 1950)   The Salvation Army and Red Cross designated Stokesville as a "complete disaster area."  ("Flood's Victims"  24 July 1949)

And yes, the little white church that remained standing after the flood is still there. According to Stokesville resident Alan Cramer, the river flooded on both sides of Stokesville Community Church, but completely missed the church. It then became a center from which Red Cross, Salvation Army and others would offer assistance to flood victims.  (Cramer, 2 March 2018) 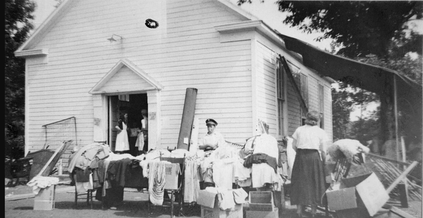 Stokesville Church, the only building left standing and in tact, became a relief station. Photo from Alan Cramer Collection.
“The farms along the river between [Stokesville and Bridgewater] sufferered probably the cruelest damage of all.  The river not only took crops and stock and buildings, but it took the soil.  On farm after farm acres of topsoil were stripped away, and in many cases the river left tons of rocks where rich fields had been.” ("Flood's Victims" 24 July 1949)  One farmer, Lester Wright, said, "I won't ever be able to raise crops here again."  He lost his largest brooder house, 1500 chickens, and the soil from his fields. ("Spring Creek" 22 June 1949)  The flashflood happened so fast and in the night that some famiies, like the Berlin Michael family and the Warren Evers family at Towers, had only time to  climb to their second floors or rooftops to escape the raging torrent.  Both families were later rescued.

“The devastation in the Stokesville area and along the course of North River … is almost unbelievable.  Nothing like it ever happened before within the period known by white people, and it is sincerely to be hoped that nothing like it will occur again.  The place where the village of Stokesville was can hardly be located, and for miles farther down the stream debris is lodged against trees and bushes and wreckage is strewed widely over denuded fields and gardens.  Bridges were washed away and great gullies are found at many places where hard-surfaced reads [sic] were before. "  (13 August 1949) 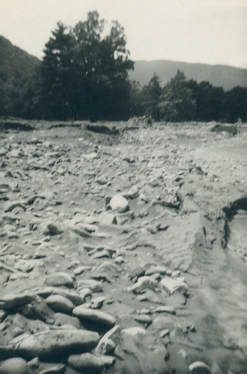 Looking west from Jake Cramer property. Photo courtesy of Alan Cramer Collection
Despite the widespread devastation and many close calls, not a single life was lost in Stokesville from the Flood of 1949.  According to the Staunton News Leader ("Scenic Tour" 10 October 1963), the losses were something like this:
On Sunday, June 26, a week after the flood, thanksgiving services were held in Stokesville and Bridgewater.  The Bridgewater service, held at Cole Hall, aimed to give thanks and "unite the community in celebrating the spirit of the Good Samaritan demonstrated by thousands of people and organizations since the flood."  The title of the sermon was, "When the Rains Came."  ("Service of Thanksgiving" 25 June 1949)
References
Cramer, Alan. Personal interview.  2 March 2018.
​
"Scenic Tour of Water Projects,"  Staunton News Leader, 10 October 1963.