The Michael and Emmett Families 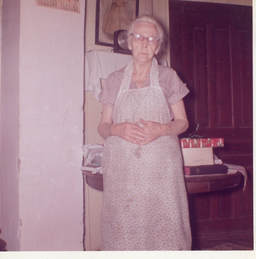 When Grandma Maggie Michael would not leave her house, her family decided to stay with her through the flood. Photo from Gay Michael and Dorwon Emmett Collection.
​The Michael Family

The Michael family lived on Main Street in Stokesville, behind the freight depot on the east side of the North River.  Two doors down, on Maggie Lane just off Main Street, Grandma Maggie Michael lived in a two-story farmhouse.  Gay Michael, who was 8 years old at the time, recollected what happened when the flood hit.

"It rained pretty hard on Friday, and some of the older Michael children were out playing in the rain. The younger children were looking forward to Kathleen’s birthday on Saturday."

​Their mother Ruby had already baked a cake.

As the rain picked up, the adults considered evacuating, but Grandma Maggie would not leave her house.  What do families do in a crisis?  They stick together. 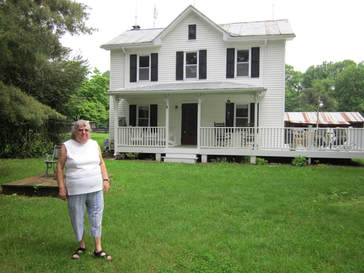 Gay Michael Emmett standing in front of Grandma Maggie Michael's house where 10 family members were marooned in the upstairs bedroom overnight during the Flood of 1949. Photo by Lynn Cameron
Nine members of the Michael family went to stay with their grandmother as the North River rose.  The surge of flood water hit all at once late in the afternoon.  The older children playing in the rain saw the surge and quickly ran for higher ground near the depot, but Ruby Michael, Aunt Nannie Mae, and Grandma Maggie, along with the younger Michael children, Kathleen, Gay, Nancy, Marie, Billy, Linda, and their cousin Betty Jo, stayed in Grandma Maggie’s house.  They all moved to the second floor bedroom that was farthest from the river and spent the night there. Gay recalls that the whole night they could hear and feel cows, pigs, and other farm animals slamming against the side of the house as they were washed downstream by the floodwaters.  The water rose to the third step of their stairway, but Grandma Maggie Michael’s house held strong.  Father Berlin Michael came home from work just as the flash flood hit and stood helplessly on higher ground, unable to do a thing. Everyone in the house was safe, but worried about the older children who had moved to higher ground.

​The next morning Tyree Huffer and the Staunton Fire Department used a metal raft to rescue the Michael family from the porch roof after a failed attempt by an Army duck.  The children were reunited with their father and siblings who were all fine.  ​ 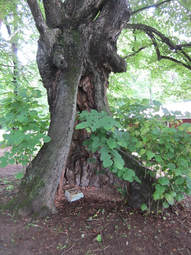 Cucumber tree by Michael house. Photo by Lynn Cameron
Sticking together paid off.  The house Berlin, Ruby, and their children lived in was ruined.  If they had stayed in their own home, they would surely have lost their lives.  The Berlin and Ruby Michael house, or what was left of it, had to be torn down after the flood.  Grandma Maggie’s house remains standing and in good condition today. ​ An ancient cucumber tree growing by the Michael house since before 1929, remains standing today, too.

Immediately after the flood, the Michael family went to Stokesville Church where the Red Cross and Salvation Army provided food, clothing, and other essentials.  They temporarily moved into a bungalow on the hill across from Stokesville Church where Gay recalls they had fantastic views.  Later, they bought two acres on higher ground on the east side of the North River, and Verlin Michael built them a house there. ​

Gay still recalls how disappointed the children were that Kathleen’s birthday cake was lost in the flood.